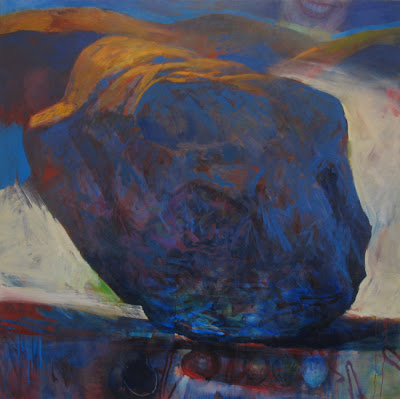 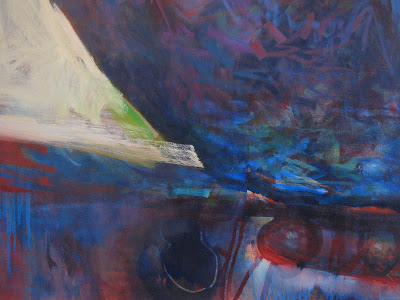 Here's the latest painting in the stone series. I've posted other pieces in this series, on April 21st,
November 21st, December 2nd and January 6th.
It is difficult to get any real feel on the computer screen for the scale and presence of this painting, which is nearly seven feet square. I've included a detail to give a little better sense of the surface. This work is painted over an earlier version, painted in 1994. I kick myself that I didn't photograph the previous state before beginning this revision. I have slides of it, but no ready photos to put on the blog.
The original Travelogue was a somewhat chaotic mix of many images, reflecting the various themes I was interested in at the time. I thought of it (and still think of it) as a kind of compendium of my creative "travels." The title was prophetic, as later that year we moved from Oregon to Arizona.
Some of the earlier imagery still shows through, such as the smiling face and landscape forms at the top and the repeated vessel shapes below. Other forms were buried beneath new layers as I tried to follow the visual logic of the developing painting; in other words: I tried something, and if it didn't work, I tried something else. There is no roadmap for work like this; I keep working until, with luck, the painting begins to tell me who/what it wants to be.
Click images to enlarge.
Posted by Don Gray at 8:45 PM

i had to visualise it as its actual size, and was struck with admiration of artists like yourself who can paint big or small. stunning colours, a true travelogue... and your final paragraph is beautifully true, when it happens:)

This is a really intriguing build on your previous rock paintings. I find, in my paintings and in this on of yours, that shadows hold the real interest an provide the glue and a lot of the story. A lot happens in what is merely seen as the dark stuff to set off the 'more important' light. I like the previous images creeping though and making the shadows a window into another idea.

When you were doing the sketches of Winston, I'd like to think this big rock was looming on the other side of the room. I love how when you veer off, it's way off.

Talking to dogs and rocks keeps us humans humble.

Don, I too get a kick out of working over earlier pieces. It lends itself so well to that "developmental" concept of painting. You have strong colour here and yet like the other stones paintings it "feels" chalky - which I love. I suppose that's not clear to anyone except me - no matter. One question - you seem to have worked with multiple colour overlays. How does that work out with oils and their longer drying time? It would send me bonkers with frustration, waiting. Also the concept of letting the painting take you where it wants to go. I agree, I enjoy that probably more than anything, but I can only relax into it with acrylics (again because of quick drying time and total flexibility) ??

Rahina, you always have something perceptive to say and I appreciate hearing from you. Your portraits just keep getting better and better.

Thanks, Kaylyn--I like your take on the shadows. "A window into another idea" is a great way to express what I'm after with these layered images.

You thought right, Sam. I've had this hanging in the studio and it "presides" over whatever else I'm doing. Thanks for your thoughts.

Hello Sheila--thanks for the note. Yes, there's quite a bit of glazing in this painting. I use Liquin as a medium--a lot in the glazes and a little in almost all brushloads. Since it's an alkyd resin the paint gets tacky in an hour or so, and the paint film is usually dry to the touch by the next day. It doesn't seem to take much of it to speed up the drying. It helps to have more than one piece in process. I do as much as I can do wet-in-wet, then move on to another piece.

Like you, I get frustrated sometimes with slow drying but put up with it for the richness of oil. I seem to have developed a technique that allows me to pretty much keep steadily working on a piece.

"Talking to dogs and rocks keeps us humans humble."

I'm going to be thinking about that all day! Thanks Sam!

Thanks for the insights into the techniques Don. Much appreciated.

You're welcome, Sheila--thanks for asking.

To me, Travelogue looks like a giant alien skull. Creepy! Are you sure you weren't abducted in the middle of the night??? :)