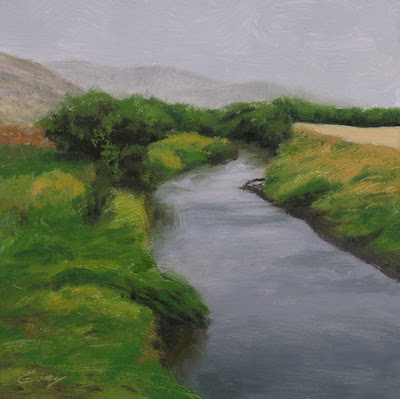 
A few people have asked me if I would document the process of the mural I'm working on in the studio, so I plan to post some progress photos from time to time. Click images to enlarge.

Here's the (very rough) sketch concept for the mural:

The 8' x 16' mural will be installed on a high wall inside the Pendleton, Oregon Convention Center, and will depict the landscape of that region. 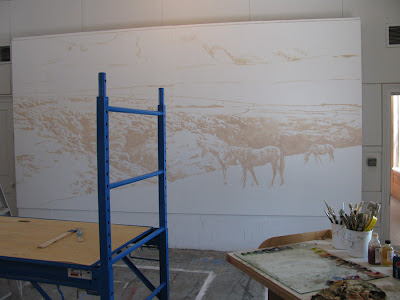 The initial plan was to use 3/4" birch plywood. I spent over a week preparing the panels and making an elaborate system of hanging cleats. When I finally got them mounted on the wall it became clear that the cleat system would not eliminate warpage in the panels, so I had to bunch that whole idea (assorted curses!)

I ended up using 1/2" thick medium density fiberboard (MDF,) which laid up beautifully. The surface was primed and then rolled with two coats of highest grade 100% acrylic flat paint. Transparencies of the sketch were projected onto the mural wall, and using light colored paint I laid in the basic lines and rudimentary shadow patterns.

This mural will be painted in oil, so the rest of the day was spent squeezing tube oils into sealable containers and thinning them with mineral spirits to a flowing consistency. Now I'm ready to paint (I think!)
Posted by Don Gray at 10:49 PM

the new painting is excellent and thank you for sharing the trials and tribulations of preparing to paint a mural. hope to see more posts on this:)r.

Wow Don, what a performance - I know you are used to it but I think I would feel quite overwhelmed. By the way, I love the rainy day painting. It has a lot of feeling.

This is an AMAZING amount of painting to be done!!! Thank you Don for showing this process... I love learning, and following this painting is such a special gift! Not many artists get to do a mural, and especially one this large. I am looking forward to seeing the next stages.

Hi Rahina--thanks. I'll put up some process shots of the mural as it progresses (or possibly regresses!) :)

Thank you, Sheila. Actually, I'm enjoying this mural a lot. It's fun to paint one in my own studio instead of on location. Also, since this one will go indoors, I'm painting it in oils, which is a nice change of pace from the acrylics used for outdoor murals.

Good to hear from you Joanne--thanks for stopping by. I like to work as broadly and spontaneously as possible on murals, so hopefully the painting will move along fairly quickly.

Rainy Day is a fabulous piece that feels so there I want to put a worm on a hook (or at least ask my wife to).

HA--hi Bill--thanks. Be sure your wife sends you out with your rain gear on too!